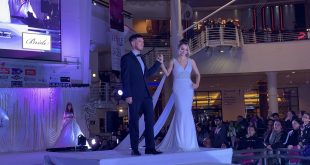 Manchester: Tensions are still running high after weeks of armed confrontation between two nuclear-armed neighbours in South Asia, Pakistan and India, which started after a deadly suicide attack in the Pulwama district of India-occupied Kashmir.

Since the last full scale war between India and Pakistan in 1971, they always had violations over the Line of Control (LoC), which divides the occupied region. But the aerial confrontation between the country was a rare occasion in which PAF shot down two Indian planes but as a good will gesture Prime Minister Imran Khan returned the Captured Indian Pilot Abhi Nandan.

India however on the other side denied visa to various athletes of Pakistani origin taking part in different sporting events across India. Indian authorities blamed recent tension between the two countries for visa refusal, However former Asian Champion Hamza Akbar was refused Indian visa on 11 Feb. 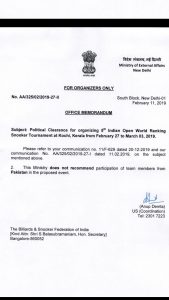 Hamza flew out to Pakistan on 27th December 2018, with all the necessary documents provided by World Snooker and the Indian promoter. He applied for Indian Visa on 5th of January 2019. He returned to the UK on 2nd February 2019 to compete in the Welsh Open, China Open Qualifier, and The Shootout.
His preparation was very much disrupted. Losing 4-0 in Cardiff and 6-0 in Cannock.
The shadow of incertainty on his mind for 2 months.

Speaking exclusively to this correspondent Akbar’s Manager said,” we are very disappointed with this development, Hamza missed out on an event due to visa refusal, under special circumstances Hamza should get a refund for a flight he took for this visa and also his Ranking Points should be reinstated along with any prize money. World Snooker should address this matter as visa refusal of Pakistani origin Players is becoming a norm now”.

Due to its hostile attitude towards Pakistan, India decided to deny visas to two Pakistani shooters who were coming to India to compete in the Delhi World Cup. United World Wrestling (UWW) suspended its membership and asked all national federations under it to stop communication with the Wrestling Federation of India (WFI)

How these thekedars of patriotism are forcing India to score SELF-GOALS!

Following the UWW decision, the concept of India facing ‘sports isolation’ has been trending all over social media, with people criticizing New Delhi for taking such a decision.