The post was shared several time on social media as people were condemning such comments and asked concerned authorities to arrest the Man.

In an Official press release Officers from GMP say they detained the Oldham man just before 2pm today on suspicion of sending malicious communications.

A GMP spokesman said: “This is a very difficult time for people. The events in New Zealand have reverberated around the world. Many people are in deep shock and are worried.
“It is at times like this that, as a community, we stand together.
“Where the law permits and people cross the line, we will take robust action, which may include arrest and prosecution.” 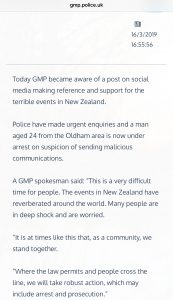 A gunman identifying himself as an Australian live-streamed the rampage at Al Noor mosque to Facebook. He had espoused racist, anti-immigrant views.

At least 49 people were killed and 20 seriously injured, in a hate-filled terror attack targeting two mosques in the New Zealand city of Christchurch.