MP Afzal Khan in a letter to PM Imran khan stated,” I would like to thank you for your support in this difficult time, around 7700 Britons have returned home. However there are thousands still stranded in Pakistan due to travel restrictions. Price hike has made it difficult for Britons to return home” 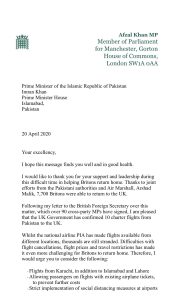 “In addition to Islamabad and Lahore, flights from Karachi should be arranged for stranded Britons on existing tickets to prevent further costs. There are number of Pakistani nationals stranded in Britain, who are unable to return.” He further added 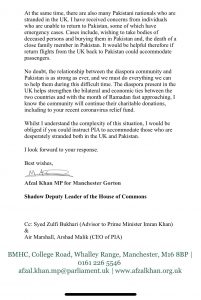 The Manchester based Member Parliament also raised the issue of taking deceased bodies for burial in Pakistan.

“I would be obliged if you could instruct PIA( Pakistan International Airlines) to accommodate stranded Pakistanis both in Pakistan and Britain as well as bodies of the deceased”. The MP stated in his letter to the Pakistani PM.

The British government and Pakistani Government has come under immense scrutiny by British Pakistanis who feel left out of the £70 million package announced to repatriate stranded Britons abroad.

An estimated 7000 British Pakistanis are still stranded in different parts of Pakistan.

From April 21, the UK will operate a series of special charter flights from Islamabad and Lahore for British nationals who normally live in the UK and their direct dependants to return to the UK. This includes British nationals holding a National Identity Card for Overseas Pakistanis. Priority will be given to vulnerable British nationals, including the elderly and those with health conditions.